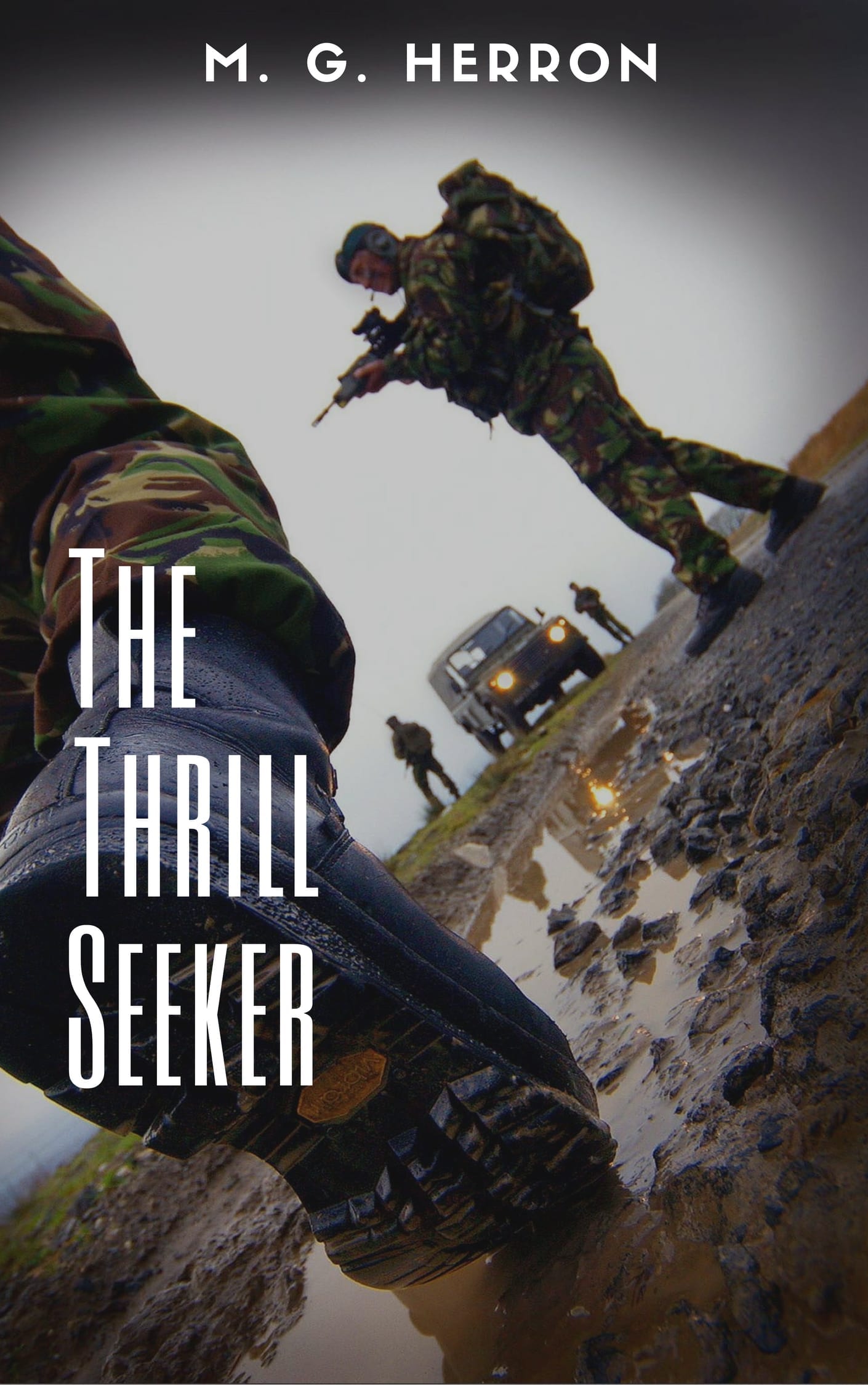 I’ll probably never know whether he left his gun in the car on accident or just didn’t wanna kill them. He told me he wanted a burger. What was I gonna say? MacLeary’s makes good burgers.

He must have held his own in there, whatever happened. The pub was wrecked. Shattered mugs, pool balls, and beer littered the floor between the remnants of a half dozen once-sturdy wooden bar stools. A splintered pool cue stuck out of the wall through an ancient, faded Cubs poster. And Marty, except for a few bruised knuckles, he walked out unscathed, burger in hand, with a big ‘ol shit-eating grin on his face. I knew there was something wrong when I saw that smile. Marty only smiles for one reason.

Marty and I had been partners for just a few months before the fight happened and he got canned. Said he was in the military before he got “sent home.” Afghanistan, then Iraq, he said. Whenever I asked him why he got sent home – and I tried a few times – he’d just clam up. Couldn’t get another word out of him for hours after that.

But I think I knew the guy all right. You spend a couple months in the same squad car with anyone and you get to know him all right. The shifts are long and there’s a lot of free time to kill.

He wouldn’t tell me why he got sent home, but he told me other stories, of combat, mostly.

Once, he said, his team jumped out of a helicopter to catch some fat cat oil baron housing a terrorist cell off his feet. Marty jumped first and shot his way through the glass roof of the pool house like something out of a James Bond film. He landed right between the Baron and his big screen television. He sat down on the couch and put a gun in the guy’s side while his team rounded up the hidden terrorists. He said the guy was watching one of those American reality TV shows. Marty got a kick out of that. Watching shows made by the same country that he was harboring terrorists from.

Another time, Marty was leading a team in Afghanistan, this one Special Forces. By his account, they chased a guerilla unit out of a little village and into the hills. The guerrillas had the lay of the land (Marty called it home-court advantage), but his team had them all in cuffs in under 48 hours. When I asked him how that was possible, not knowing the desert and all, his lips spread into that same wicked grin that was plastered on his face when he walked out of McLeary’s.

I never was in the military myself. I went straight into the local PD after college. My wife and I were just married and I needed a steady career to support the family, one where I wouldn’t get shipped off to the desert. My wife still worries for me as a local cop, and the most action I see is with Marty as my partner. My wife would be hysterical if I ever told her I was jumping out of helicopters or chasing guerrillas units into the desert.

No, I’m okay here. I like the job. I do my duty and get to come home and wrap my arms around my lovely wife in a nice neighborhood. But in my time on the force, I’ve met a lot of ex-military, and some of those guys, especially if they were Special Forces like Marty, they’re a different breed.

Spending nights answering domestic disturbance calls or tossing college kids into the drunk tank is too dull for them. After you jump into enemy territory with a rifle in one hand, a grenade in the other, and the firing pin in your teeth, life just ain’t the same unless someone’s trying to kill you.

That was Marty’s world and I could tell that all that time cooped up in the squad car was getting to him.

As for the bar fight? Well, that’s anyone’s guess because his partner didn’t tell the higher-ups. I didn’t tell them. I left it out of my report and no one else saw it.

Marty was always rough with the clientele, especially the young hotheads all full of piss. He thought they needed a lesson and he was happy to be the one to give it to them. But that afternoon at McLeary’s was the first time he ever went in unarmed and alone. If he knew the fight was gonna happen, why did he go in alone? Honestly, I was a little hurt, too. He knows I would have had his back, firearm or not.

And we’d still be partners if that damn weasel hadn’t cried Uncle over a few broken ribs. Some men are such babies. He probably deserved it. Marty never gave a lesson to nobody that didn’t deserve it. All the same, I thought I had some time to puzzle out why he left the firearm. Turns out, though, that the baby-man’s Uncle is a big name in our Chief’s ear.
When the orders landed on Marty’s desk, he took one look and started packing. Not rushing, not stalling, just like he was expecting it, real calm.

The orders surprised the hell out of me though. I was the one who wrote the report, after all, and no one consulted me. But it doesn’t always work that way. If the orders land on your desk, double signed from the higher-ups, it’s game over. I snatched the orders up and read through them twice before I believed it. There’s a chance for appeal, I guess, but when it comes down like that the chances aren’t good.

By the time I was done reading, Marty was done packing. Then he asked me to take him to the airport. Didn’t say where he was going, but I agreed, of course. We were partners. Then he turned and left the office for good.
By the time I untangled the political puppet strings, Marty was long gone, but I’d bet he knew about the politician’s nephew all along. He would do something like that, get into trouble just to see what was on the other side. He was no quitter, he just wanted to end things on his own terms.

When I dropped him off at O’Hare, Marty was dressed in civilian clothes. He had shaved his head, though, and he sported an old pair of combat boots. An extra pair was tied to the outside of his military-issue, camouflaged  backpack. He removed an oblong canvas bag from the trunk of my car and stood facing me outside Departures.

“If you ever get tired of local PD, send me an e-mail. I should be able to check that from time to time.”

“My wife would have a cow.”

“Well, all the same, the offer stands.”

He shifted the canvas bag to his other hand. It looked heavy.

“By the way, Cal, thanks for not mentioning my firearm in the bar fight report. I knew I could count on you. Did I ever tell you that you would have made a good soldier? You think too much, but you’re loyal, and you always got my back. Don’t think I didn’t notice.”

“Thanks, Marty. Say, you never mentioned where you’re headed.”

“No, you didn’t. Where you going Marty?”

His lips spread again into that wicked grin. A long pause. He chewed over his answer.

Then Marty turned and walked into the gate and I watched him go.