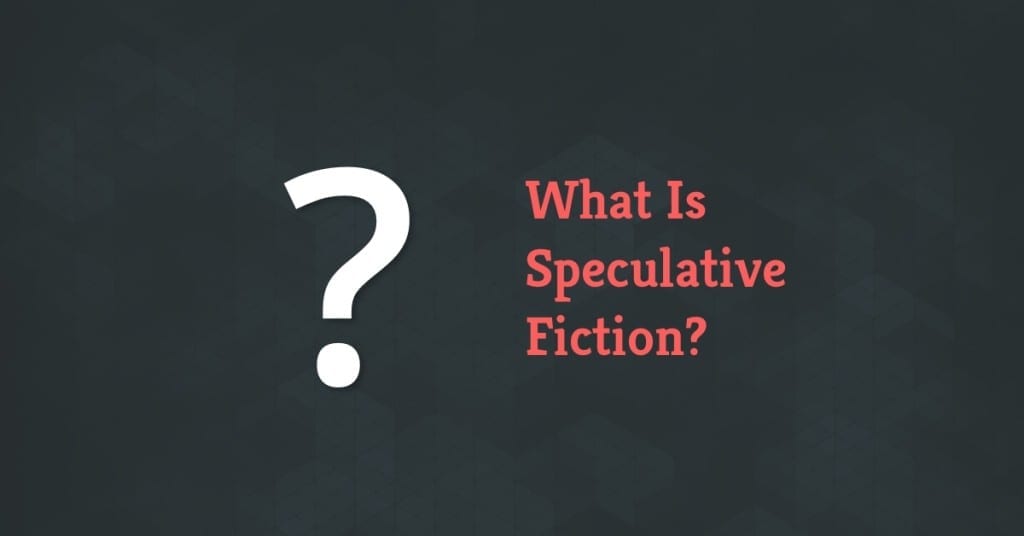 While debates about the true meaning and inclusiveness of the term “speculative fiction” rage on among the SF community, I find that most readers don’t know what it means, or at least have trouble distinguishing speculative fiction from other genres.

I doubt the debate will soon be resolved. Whenever one voice embraces the term, another raises in outcry. Nonetheless, the “speculative fiction” enjoys wide use today and seems determined to stick around.

So, with the aim of dispelling the confusion about speculative fiction, here’s a popular definition, a little bit of background, and an introduction to the more contentious aspects of the debate.

What Is Speculative Fiction?

The popular definition of speculative fiction that you’ll in most dictionaries and on Wikipedia is this:

Generally speaking, speculative fiction is used as an umbrella term. It includes not only scifi and fantasy, but all the niche genres that overlap or intersect with science fiction/fantasy such as horror, alternate history, dystopian, utopian, post-apocalyptic, superhero, magical realism, and any other fantastical or weird story. Editors sometimes use speculative fiction is often used to categorize stories that don’t fit anywhere else.

Since authors like to mash up genres with increasing frequency (science fantasy, anyone?) and varied rates of success, and the boundaries between genres continues to deteriorate, speculative fiction is a useful term. It tries to be inclusive and it’s succinct.

Speculative Fiction: Origins of the Term

The first use of “speculative fiction” dates back to 1887, when it appeared in Lippincott’s Monthly Magazine:

“Edward Bellamy, in ‘Looking Backward,’ and George Parsons Lathrop, in a short story, ‘The New Poverty,’ have followed the example of Anthony Trollope and Bulwer in speculative fiction put in the future tense.” (OED Citations)

Most of the time, however, Robert A. Heinlein is given credit for popularizing its modern usage when he began to refer to speculative fiction as a synonym for the type of science fiction he writes.

“Speculative fiction (I prefer that term to science fiction) is also concerned with sociology, psychology, esoteric aspects of biology, impact of terrestrial culture on the other cultures we may encounter when we conquer space, etc., without end.” (OED Citations)

“Speculative fiction is not fantasy fiction, as it rules out the use of anything as material which violates established scientific fact, laws of nature, call it what you will, i.e., it must [be] possible to the universe as we know it. Thus, Wind in the Willows is fantasy, but the much more incredible extravaganzas of Dr. Olaf Stapledon are speculative fiction—science fiction.” (OED Citations)

The modern usage of speculative fiction evolved from Heinlein’s strict guidelines thanks, in part, to the New Wave movement of writers in the 1960s. They championed speculative fiction as a way to differentiate themselves from the pulp scifi of their predecessors. Books such as the anthology edited by Judith Merrill, England Swings SF: Stories of Speculative Fiction (Doubleday 1968), wholly embraced the term and made it their own, even though science fiction and speculative fiction continued to be used interchangeably throughout the ’60s and ’70s.

More recently, Margaret Atwood took up the torch for speculative fiction. A collection of essays from 2011, In Other Worlds: SF and the Human Imagination, contains her thoughts on the subject.

She’s forthcoming about the muddy usage of speculative fiction:

“Some use speculative fiction as an umbrella covering science fiction and all its hyphenated forms—science-fiction fantasy and so forth—and others choose the reverse.”

At the same time, she acknowledges that all of these fantastical genres belong together in some way:

“When it comes to genres, the borders are increasingly undefended, and things slip back and forth across them with insouciance.

[S]urely all draw from the same deep well: those imagined other worlds located somewhere apart from our everyday one: in another time, in another dimension, through a doorway into the spirit world, or on the other side of the threshold that divides the known from the unknown. Science Fiction, Speculative Fiction, Sword and Sorcery Fantasy, and Slipstream Fiction: all of them might be placed under the same large ‘wonder tale’ umbrella.”

As if in an attempt to visualize this blending phenomena, novelist Annie Neugebauer illustrates the “differences” between speculative fiction and other nearby genres in a blog post from 2014 with this Venn diagram: 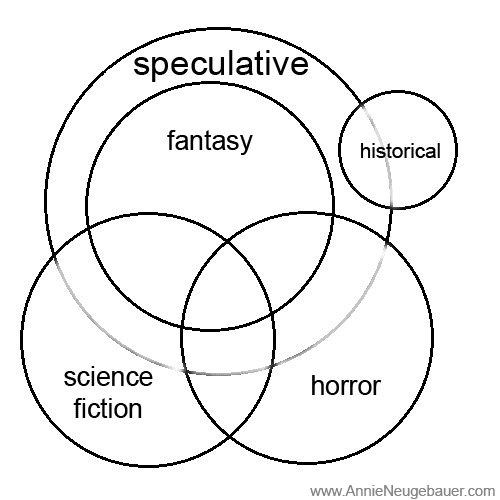 It’s an interesting study, but I include the image and put “differences” in quotes because the actual differences are a matter of opinion.

To further illustrate these differences, take this article from 2002 that includes the definition of speculative fiction from the point of view of several fiction magazine editors. My favorite is the last, a quote attributed to Raymond M. Coulombe, then the editor of Quantum Muse:

“What is Speculative Fiction? The classic answer is that it’s the fiction of ‘what if?’ What if we had a time machine? What if we had faster than light travel? What if there was a codified reliable system of magick? What if we had honest government?

For me, that is a nice place to start, and whole careers have been made writing nothing but ‘what if?’ stories. Writers could do worse. Sadly, many do.

As an editor at Quantum Muse, I also like to print speculative fiction that fits the ‘what the f**k!’ category. Think of those stories that are more edgy, perhaps weird, and maybe more than a little disturbing. There may be overtones of science fiction, fantasy, or horror, but the story does not fit comfortable into any one of those categories. At Quantum Muse, about a third of each issue is in our ‘alternative’ category. Sure, about half of those could be shoehorned into an established category, but for the rest, there is no place but alternative.”

While the trend toward the blending of genres and inclusiveness is clear, the exact definition of speculative fiction remains flexible depending who you ask.

The Debate About Speculative Fiction Among the SF Community

That’s a brief introduction to the term, but any article on the subject would be incomplete that didn’t mention the ongoing debate about speculative fiction among the SF community in general.

If you want to get into the nitty gritty details, this essay by Margaret Atwood published on io9.com elaborates on the particulars of the differences between her definitions and those of Ursula K. LeGuin—where they overlap, and where they vehemently disagree.

Cat Valente, on the other hand, “feel[s] the stigma” of being an SF writer and claims that speculative fiction doesn’t include what she writes—“fantastika”—under its wide umbrella.

It’s not uncommon for a writer to shun the term entirely. Writer Jamie Todd Rubin thinks speculative fiction is a “pretentious” term, and a way to avoid saying “science fiction” or “fantasy” or “horror” (as we’ve seen, the New Wave writers did just that—as a way to set their work apart from the pulp SF stories of their predecessors.) But what of those ‘what the f**k’ stories that does not “fit comfortable” in any of these categories? Where do they get placed?

I’ve used speculative fiction to describe my own stories, but I eventually defaulted back to “science fiction and fantasy” because most people didn’t know what “speculative fiction” really meant. And perhaps we still don’t. These buckets and terms all seem like an artificial attempt to classify work that refuses to fit neatly into a box someone else built. And isn’t one of the driving purposes of writing fiction to break the boxes we’ve placed around our lives and help us see the world in a different way?

I don’t think more specific categories are useful any more. Sure, Amazon subgenres are great at making some books more visible, but I see books in the “wrong” categories all the time—Yoga books next to college reference guides (yes, really.) Post-apocalyptic books in Space Opera. Books with time travel in the Hard Science Fiction category next to The Martian.

If the categories can’t be accurate, I’d rather have an umbrella term that holds all “wonder tales” loosely and lets books be themselves. That’s why I like “speculative fiction” as a genre. No one is telling me what these books are other than fantastical and imaginative. As a reader, I can discover what they are on my own without being put off by an inappropriate label.

Do you agree or disagree? How do you understand the term “speculative fiction”? Share your thoughts in the comments.

For those of you looking for great speculative fiction books to read, here are a couple lists to reference:

I encourage you to share your favorite little known speculative fiction titles in the comments, too!