This is a deleted scene from my novel, The Republic. It takes place in Episode 4: High Crimes, and looks at a pivotal moment in the story, but from a new character’s perspective, a soldier who is also an APU mechanic. 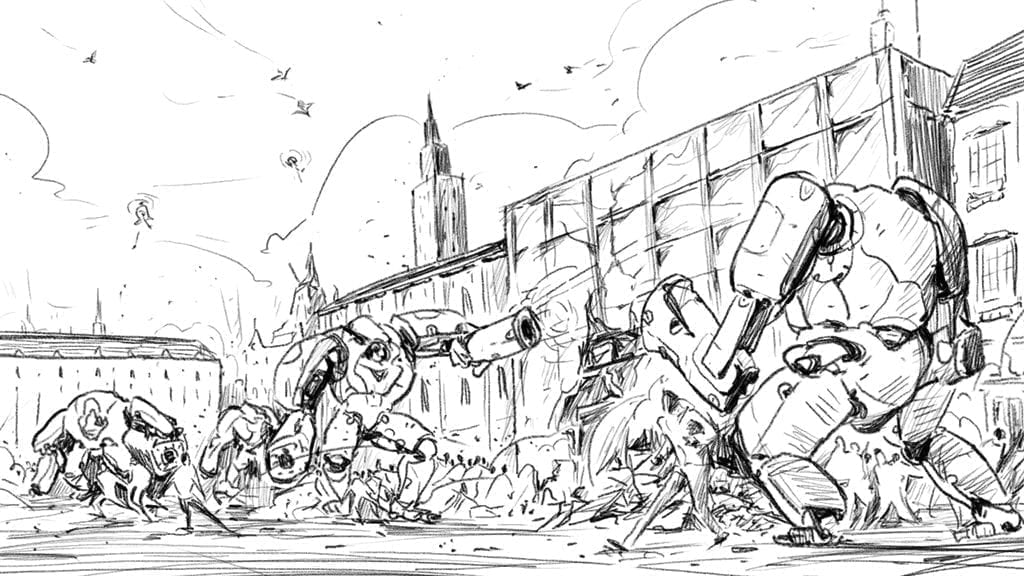 Private Rajit Kapur tossed the blackened rag to the ground and stood, arching his back against the stiffness in his muscles. He drew a dirty sleeve across his face, but sweat still skidded down his greasy brow to sting his eyes. In the distance, a lantern at the top of the Capitol building flickered, signaling that the senate was still in session. No doubt they would be going late into the night.

He looked back down at the day’s futile effort. He’d been working on the APUs since he woke up. What most people call mechs, soldiers call Armored Personnel Units—or “apes” because of their long arms and fearsome power. His gorilla of the day, number 049, was still broken as hell, but now it was less dirty. The shine had returned to the metal armor on the front. He set the cockpit’s control panels and joysticks to rights, replacing parts that had been broken or too burned to bother cleaning. Soot seemed to be permanently embedded in the fine cracks between panels, and along edge of the foglights embedded in the sternum, but at least you could tell it was a fighting machine again and not just a big hunk of scrap metal.rivate Rajit Kapur tossed the blackened rag to the ground and stood, arching his back against the stiffness in his muscles. He drew a dirty sleeve across his face, but sweat still skidded down his greasy brow to sting his eyes. In the distance, a lantern at the top of the Capitol building flickered, signaling that the senate was still in session. No doubt they would be going late into the night.

Repairing the APUs was tedious work that made his back ache, but Raj liked it better than night patrols, or marching in formation drills, or cleaning the officer’s mess hall. Come to think of it, almost anything was better than that last one.

Besides, Raj was good with machines. And it bothered him that he hadn’t been able to get a single one of these busted grease monkeys to gas up yet.

“Ey Kapur! You figger out how to turn yours on yet?”

“Thank god. You had me convinced you were a mechanical genius there for a while. Glad to see a problem can stump you, too.”

Private Stanislov, a mechanic who joined the APU squadron right before they flew back from the western border to offer support in Enshi, did not share Raj’s desire to get the APUs back online.

Stanislov kicked the metal leg of the APU nearest to him with contempt. His boot failed nudge the half ton machine from its spot.

“I don’t get it,” Raj said. “I’ve already swapped out fuses in all three, rewired the diagnostic panels to two of them, run the reset operation from my tablet twice. And still no juice!”

“The longer we spend back here in the parking lot the better as far as I’m concerned.”

“Maybe the lithium batteries were damaged in the fighting.”

“That wasn’t a fight, it was a slaughter.”

Raj didn’t want to have that discussion again, so he changed the subject.

“It’ll take half a day to pop one open and scour the core for damage.”

“And what? You don’t actually think a little fall punctured the battery.”

Of course he didn’t. The mechs were designed to withstand long-range weapons, patrol a thousand miles of border, and hold their ground under artillery fire. They weren’t meant to be easy to destroy. But what else could it be?

Kapur looked at the wires running to the tablet he’d left on the pavement by the leg of 049. The face of the tablet glowed a bluish tint.

Kapur picked up the tablet and ran the core diagnostic one more time. He keyed the ignition of the mech twice to dead air.

Kapur put his fists on his hips and stared over the prone bodies of the dead mechs. It was weird being this close to the Capitol, but it was, at the same time, heartening to be reminded what you were fighting for. Kapur only hoped the people inside knew what they were doing.

As he watched, the lantern blinked out.

A second later, rows of green LEDs that ran up the left leg of all three prone mechs flickered to life.

“What the hell?” Stanislov said.

Private Kapur disengaged himself from Stanislov’s excited grip and picked up his tablet, which was still hardwired. The screen filled with commands, like the readout you might expect to see during operation. But no one was in the pilot’s seat to issue the commands. “But I didn’t do anything.”

The mech to which Private Kapur’s tablet was connected bent its knees and torso and used the gyroscope in its core to rotate itself to its feet. It twisted right, and then left, as if surveying its surroundings. Then it cocked back one arm, the multiple turrets embedded in its forearm clicking as they rotated.

Stanlislov swiveled back just in time, and that’s why he was able to turn his body a few inches and dodge the missile that blasted out of the APU’s leveled arm.

The projectile exploded at the foot of the rot iron fence bordering the lawn in front of the Capitol building. Shards of metal flew into the air, smoke rising in a column through the boughs of the trees that shaded a garden where a certain senator and a certain magistrate had sat to rest earlier that day and watched Raj and Stanislov pull the mech off a truck.

The tablet jerked out of Private Kapur’s hands and skidded across the pavement as the mech ran toward the smoldering hole in the fence.

Hydraulic pistons and the heavy metal thud of mech feet sounded to Raj’s left. The other two mechs were waking up and looked as if they wanted to follow the first one.

Stanislov had scooped his tablet off the ground and called in a code black. A single, long, wailing siren sounded in the air across the whole army camp.

Raj sprinted to the nearest operational APU and dove into the pilot’s seat. He jammed the yolk forward and took off in the direction of the rogue mechs. At least a dozen soldiers who had been patrolling the perimeter when the mechs broke through were close on his ape’s heels.