The other day I wrote about how creativity is not a well that can be emptied, or which diminishes over time. It’s more like a muscle that gets stronger with exercise. 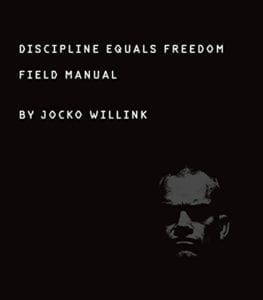 I was talking about writing. But sometimes coincidence packs a hell of a punch. I fired up my podcasts app yesterday and saw that Jocko Willink, decorated Navy Seal, was guest hosting The Tim Ferriss show.

He has a new book out called Discipline Equals Freedom: Field Manual. One section talks about the “psychological win over the enemy” that a person gains from waking up early, which leads him to the topic of discipline.

This is what he says…

“Now, some scientists have claimed that discipline dissipates the more it is used—that willpower is a finite resource that is reduced every time it is used during the day.

This is wrong. That does not happen.

To the contrary, I believe, and studies have shown, that discipline and willpower do not go down as they are called into action—they actually get stronger.”

Could it be that discipline and creativity are the same that way? They get stronger, better, smarter, the more you use them? The more you work at it?

This makes sense to me. Creativity, especially regular writing output over a long period of time, certainly requires discipline. It can be hard. It calls up fear. It demands sacrifice. Creativity and discipline are the same that way.

Willink goes on for a while about this. Then he warns the reader away from the downside…

“Unfortunately, the opposite is also true. Once you step off the path [of discipline], you tend to stray far. When you don’t prepare what you need to do the ne

xt day, when you sleep in and then skip your workout and you don’t start attacking the tasks you have—because you didn’t write them down the night before—that is when you make bad decisions. That is when your will and discipline fail. You figure you might as well have that donut for breakfast and once you have done that, might as well put down four or five pieces of pizza for lunch. It doesn’t matter anymore—you’re off the path and that is a disaster. Your will didn’t break—it never showed up in the first place.

Will propagates MORE WILL.

Hold the line across the line and victory will be yours.”

Willink’s words inspired me so much I actually got up early this morning and exercised. That’s why sleep is calling me at 9:21pm on a Saturday. So I’m going to head to sleep.If you’re still awake for a while longer, you can listen to the man read the words himself on Tim’s show. He is inspiring.