Ahoy, stargazers! I’ve returned to Austin from a week-long vacation at the land of 10,000 lakes. Just in time to deliver you a new sci-fi short story.

Not Alone is about a freighter pilot who’s down on his luck but won’t give up his dream. 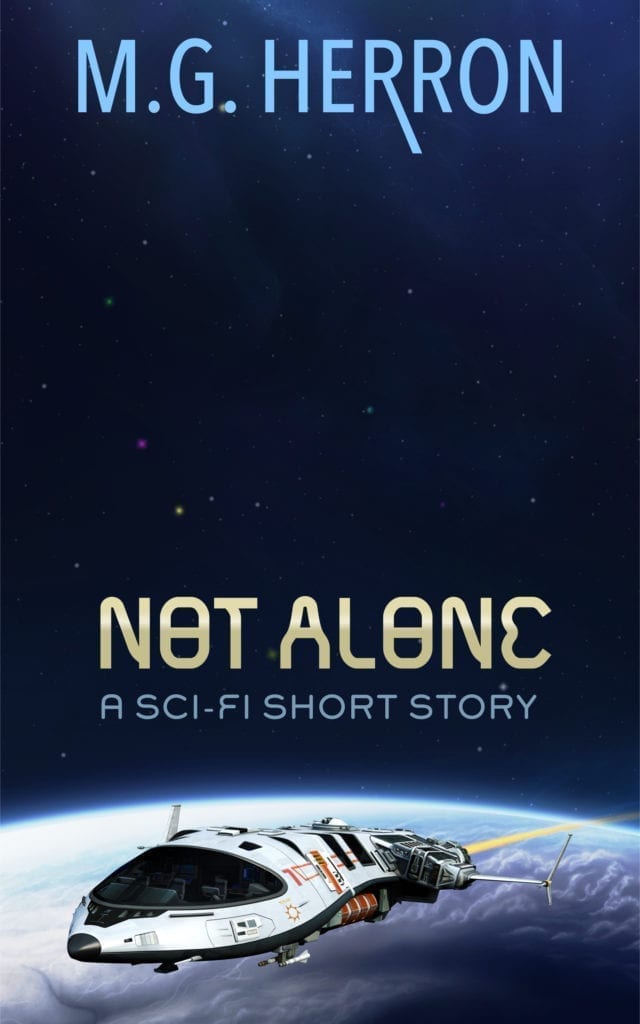 Did life ever exist on Mars?

Astrobiologist Ackley Griven once set out to answer that question…and came up with squat.

The mining companies, though? They struck gold on the red planet. Gold and oil.

When accidents in the low mines bring Griv back to Mars with a delivery of mining bots to replace the ones that were inexplicably destroyed in electrical fires, his stale search for Martian life is thrust onto a surprising new trail.

Not Alone is a science fiction short story about space ships, superstition, and one man’s lifelong obsession.

Get Not Alone on Amazon

A sample from the beginning of Not Alone…

After paying for the station mechanics to repair a small breach he discovered in the hull of his ship during the journey back from Mars, Griv bounced off his freighter like a man half his age and fifty pounds lighter. A message from Deirdre had synced to his personal inbox when he docked, and though they had bickered bitterly last time they spoke, the prospect of seeing his daughter elated him. Not even the cost of the repairs could get him down just now. It felt like someone in the control room had cranked back the artificial gravity on the space station.

He relished the floating sensation as he strode in worn leather boots through the familiar bustling traffic of pilots, passengers, and supplies on the hangar floor. His equally battered duster—not leather or canvas, but a heavy, breathable synthetic the color of which matched his brown boots—billowed appreciatively behind him.

Near the far end of the hangar, Griv stopped and waited while a young mechanic with a scraggly goatee guided a replacement spacecraft wing through a thick crowd. The wing was supported on a maglev cart. Griv knew the metal floor was lined with magnets so that a single person could move heavy equipment—like that wing— across the hangar. But most civilians had never seen such a thing. A knot of Asian businessmen and their wives—space tourists—whispered and pointed excitedly, and waved the mechanic to a halt.

A geriatric gentleman wearing a green casino visor and fine polished shoes of expensive leather separated himself from the others. With a wide grin plastered on his face, he approached the mechanic. The young man’s expression went blank and he nodded, but Griv noticed his posture stiffen as the tourist ran his hands along the sleek metal surface of the spare wing. A woman handed a small camera to a third man, and sidled up next to old gent. The third man took photos of the couple in two poses, and another when the woman pulled the mechanic into a third shot. The young mechanic’s face softened into a hesitant smile. The old man laughed aloud, then lounged back onto the edge of the maglev cart and jostled the heavy metal wing.

The mechanic’s face went pale. He tore himself away and fumbled with a controller in his hands. The top-heavy wing began to tilt and the mechanic desperately threw his own shoulder under the wing. Griv brushed through the crowd, elbowing the frightened tourists out of the way, and added his own hands to the other end of the wing. The mechanic finally managed to stabilize the maglev cart with one hand on the remote control.

“Thank you,” the mechanic whispered to Griv.

“Damn tourists,” Griv muttered under his breath, winking at the younger man.

The mechanic blanched, then rapidly hurried off in the opposite direction, using the remote to speed the wing to safety, away from the tourists. They hollered apologies as he retreated.

Griv chuckled and shook his head as he walked onward. It was no surprise that the mechanic kept his mouth shut at Griv’s comments, but it rankled him at the same time. The lucrative space tourism trade greased the metaphorical wheels of every space station now, he knew. Near-Earth orbit was the new exotic getaway.

Silence finally came like a thunderclap as he passed from the orderly chaos of the hangar into the narrow corridors of the space station proper. On the High Road—a long, slightly curved foot path that encircled the rotating core of the station—where he had time to think, Griv began to worry what his daughter might say. Could they just have a nice lunch together, or would she bring it up again, all that stuff about his health and how he needed to settle down? She was just like her mother that way. Griv lengthened his stride, knee joints popping from lack of use. He used to be able to do a dozen round trips to Mars with barely a dock-day between them, but the same pace was much harder on his body these days.

He finally stepped off the High Road and turned into the newly constructed greenhouse extension, where Deirdre said she would be. The round entryway door spiraled open with a soft sigh of air, and Griv waded into the thick smell of rich earth, thyme and rosemary and—he wrinkled his nose—cabbage. Vines hanging from a lattice overhead brushed his shoulders as he wandered deeper into the place.

Incredible that they’d set all this up here. The scientist in him, long dormant from lack of use, began to wonder how they’d transported the soil, and what percentage of the water used to grow this lush opulence was recyclable. Was it a drain on the station’s ecosystem? Was growing thyme extravagant, and should they focus more on the staples of the human diet—potatoes and cabbage for instance?

Deirdre would know. The company she worked for, Sustainable Rotation, had been crowing about a sustainable future for humanity in near-Earth orbit for over two decades. They ran nearly a dozen of the so-called Habitation Stations, space stations meant only for civilian use, and reserved for the ultra-rich.

But this was something else entirely.

Griv rarely made it out of his ship, let alone wandered to the experimental side of this station. Remarkable what they’d managed to achieve. Would it reach their goal of full sustainability? And if so, how long would it last? He absent-mindedly cycled through water-use calculations in his head, but was quickly overwhelmed by the sheer magnitude of it, and was that much more impressed with his daughter’s abilities. She was light-years ahead of him as a scientist. Good for her.

“Ackley Griven!” A man’s surprised voice cut through the thick air. “Is that you?”

The prideful glow dampened, and Griv turned to see a group of lab-coated scientists surrounding a man wearing designer jeans with more holes than fabric. The difference in the man’s appearance drew his eyes—he was a full foot shorter than Griv and wore a Henley t-shirt with all three buttons opened at the top to reveal an annoyingly well-muscled chest. His head was as hairless as his chest, and he was missing both eyebrows. Once a genetic disorder called alopecia, full hairlessness was now an affectation of the ultra wealthy.

“Well, I’ll be,” Griv said, extending his hand. “The man himself. I wasn’t sure you’d be here, Sinclair.” He owned this station—he owned nearly a dozen of them. Of course Griv knew Sinclair Axelrod would be here. He was just hoping he wouldn’t be.

“Deirdre,” Sinclair said, mock disapproval in his tone. “You didn’t tell me you were expecting a visitor.”

Griv’s daughter stepped out of the pack of scientists that surrounded Axelrod. Auburn curls framed her lightly freckled face. Soft cheeks cut down to a pointed chin the exact opposite of Griv’s own chin, which in recent years had seemed to merge into his neck. Her face was hard, her green eyes flat and angry. But a big, loving smile spread helplessly over Griv’s face at the sight of her, and his daughter’s face softened as well.

“I didn’t know if he would come,” Deirdre admitted.

“Here I am,” Griv said, spreading his arm magnanimously. “Sinclair, the space tourism industry has been good to you. This garden is like a slice of Eden. Incredible, truly…but we all know who really deserves the credit.”

“He’s right, of course,” Sinclair said. “You have a naturally green thumb, and a brilliant rational mind.”

“She inherited that one from her old man,” Griv said, tapping his temple with one finger. Deirdre gave him a wry look. “Do you mind if I borrow your head botanist for a little while?”

“By all means. We were just wrapping up.” Sinclair made a motion, and the cluster of lab-coated cretins followed the little bald man away.

Griv held out his elbow. Deirdre took his arm, looking askance as she pressed her tongue against the inside of her cheek

“You’re not mad?” she asked when the others were out of earshot.

“You have to admit, you do spend a lot of time on that ship.”

“That’s how I make my living, sweetheart.”

She looked at the floor. “It’s also become your home, which is not healthy. You can’t live on your ship, Dad. Fill out an application and I’ll fast track you into the Habitat program. You’ll get a place to live, a guaranteed basic income…a cabin all to yourself!”

“I’m not taking charity, Dee. Especially not from goddamn Sinclair.”

“It’s not charity. You’d have to work your hours on the farms or in the water sanitation facility, the same as everyone else. And Sinclair has nothing to do with it.”

She frowned at her father. “I work for his company. I live for myself. And I care about you.”

“Other people live on the station, Dad. I worry about you, spending so much time alone.”

She gave him a dark look. They didn’t talk about his work much. Griv had been a government researcher once, the head of the first team to conduct scientific research on a foreign planet. No research teams worked on Mars these days. All the money for industry on Mars went toward the hunt for new petroleum deposits, and the lucrative gold and platinum mines. Griv used to be get angry when he thought about the potential signs of ancient life those idiots were probably destroying every single day as they greedily sucked the marrow from the bones of their sister planet.

Deirdre put her hands on her father’s arms and looked straight into his face. His heart broke when saw the tears forming in those big glistening greens.

“Dad, I know why you keep going back. You’re hoping something will change. But there’s no life on Mars. We’ve known that for decades now. I can’t deny that there’s got to be sentient life out there somewhere. You taught me to believe what I can see with my own eyes, and I look out at the stars and think that in all that vastness, there have to be others like us somewhere in the universe. But can’t you look elsewhere?”

Griv said nothing, but his heart ached.

“I love you, Dad, but you can’t go on like this. It’s not good for you. I miss you. Even mom misses you, though she’ll never admit it. Stop searching for something where there’s nothing to be found.”

Finish reading Not Alone on Amazon