I can’t believe it’s the end of May already. It seems as if time itself has raced past me this year.

There’s so much I want to accomplish and do before the year’s end. Books and client projects—and what I guess I’ll lump together and call LIFE STUFF—all competing for my attention. Sometimes different stories even compete for the writing time I have set aside.

But I’m trying to stay focused. Most of my writing time has been devoted to Translocator 2. When I get restless I write these blogs and plan the launch of the Tales of the Republic complete novel—which happens on June 13th by the way. *HINT HINT*

Translocator 2 has until June 17th to fully bake, though. And, I actually feel pretty good about it right now! This is weird for me. I’m taking it this confidence as a trust in the process and the work I have yet to do. Also, it helps that since I rejigged the ending—I’m pretty sure— mostly sure—like nearly 99% sure it’s going to come in significantly shorter than I had expected. This is great. To be blunt, less words = less work.

And that means less time I have to spend on it. Amen. 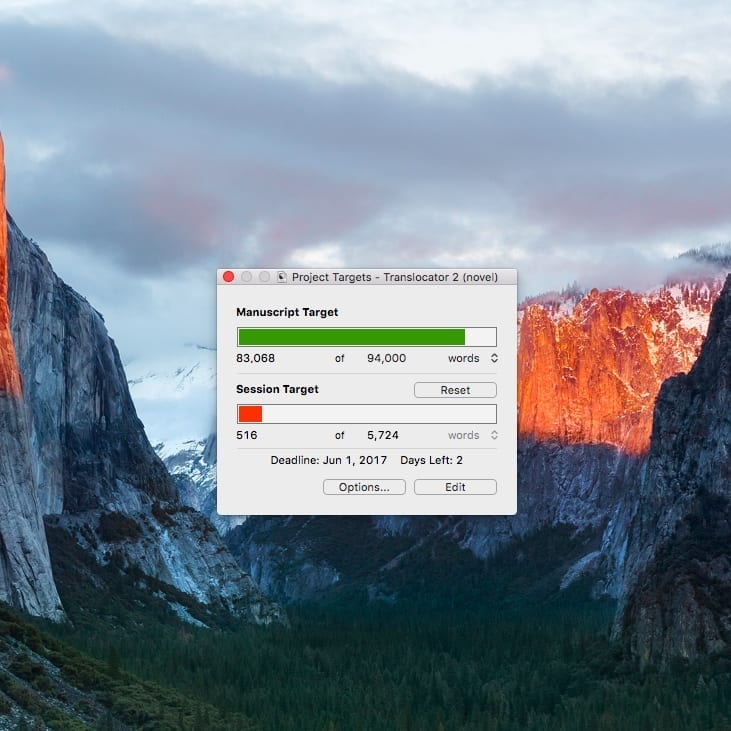 I lowered the goal to 94k, but I’m actually thinking, maybe 90k? Maybe less? Either way, I’m just winging it from here.

I am less than a week from WORDS COMPLETE. Home stretch, baby!

After that, I have until June 17 to read through and tidy up. I’ve got to revise a few scenes because their first drafts missed the mark, but mostly just tighten and smooth out the prose, and fix errors and inconsistencies.

After the Tales complete novel launch in June, I’ve been thinking about lining up some snippets from the unedited version of Translocator 2 to share. That will be fun.