When I decided to rejig the ending of The Alien Element, a lunar nuclear reactor became important to the plot. I’d planned this from the beginning, but I was hazy on specifics.

Realizing I needed to backfill some of the details in the book, and wanting to make sure that it’s as realistic and technically accurate as a novel about teleportation, ancient aliens, and Mayan ruins can possibly be, I started searching around on the interwebz…

And MY GOD was I happy with what I found.

I already had an idea that NASA uses portable nuclear reactors to power their missions to the moon and Mars. I love learning about NASA missions and I found all sorts of fascinating stuff to inspire me. 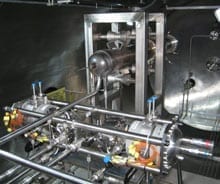 Like this Technology Review article on how NASA stress-tested a lunar nuclear reactor made with two Stirling engines circulating liquid metal back in 2009. Apparently they plan to put people back on the moon in 2020? Does anyone know if that’s still happening?

And this one from The Telegraph about how China wants to send people to the moon to mine Helium-3. I had no idea this was even a thing, or that a powerful isotope was present in the moon’s crust.

This extraordinary substance is the isotope helium-3, invaluable in ensuring the safety of nuclear power stations on Earth, and providing an all-powerful rocket fuel.

It is rare on Earth, being blown away by the solar wind. It is found in Troclotite, a metal of magnesium and iron, again rare but plentiful in the Moon’s crust.

My mind is racing by this point. I can’t possibly use all of this in the book I’m writing. I’m already overwhelmed by the number of threads I must tie together. It’s fascinating to me all the same.

A fully-loaded spaceship’s cargo base could power a quarter of the world for a year. This means that helium-3 has a potential economic value in the order of about £1 billion a ton, making it the Moon’s most valuable commodity except perhaps for astronomy and promoting tourism.

Wow. The idea of people mining the moon, which controls our tides, which influences our weather patterns and ocean life and much more, is absolutely terrifying.

But wait! Here’s more about the radioisotope power systems used by NASA “in numerous long-term missions, from Voyagers 1 and 2 to the Mars rovers”: a brief history on energy.gov.

If you want to know more about the many generations of radioisotope thermoelectric generators (RTGs) used by NASA for spacecraft, see their page on RTGs at nasa.gov. 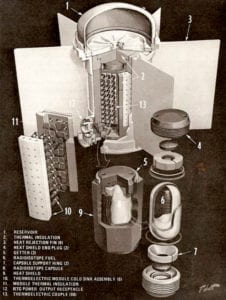 Lessons learned from the kiloPower development program are being leveraged to develop a Mega Watt class of reactors termed MegaPower reactors. These concepts all contain intrinsic safety features similar to those in kiloPower, including reactor self-regulation, low reactor core power density and the use of heat pipes for reactor core heat removal. The use of these higher power reactors is for terrestrial applications, such as power in remote locations, or to power larger human planetary colonies. The MegaPower reactor concept produces approximately two megawatts of electric power. The reactor would be attached to an open air Brayton cycle power conversion system. A Brayton power cycle uses air as the working fluid and as the means of ultimate heat removal.

How cool. MegaPower reactors… I like the sound of that.

If you want to see how I use it in the book, check out The Alien Element.

If you enjoy geeking out about the science, don’t forget to wander over to the fun concepts I found to help construct lunar domes in the books. 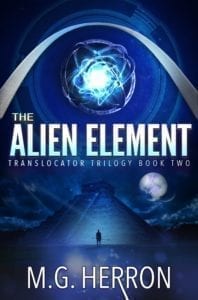 A fast-paced science fiction thriller with an edge of the fantastic. A treacherous quest for answers that becomes a harrowing battle against an ancient adversary beyond imagining.

Book two of the Translocator Trilogy.