The rain did come through and cool the city down. It rained last night and all through the day today, though I imagine I can still hear the asphalt sizzling. It’s mid August. Too early for fall. The heat will come back with a vengeance before summer breaks for good.

I spent the day hiding from the rain, and cleaning. I emptied every drawer in the house and purged the junk from my office. It’s a small thing, but it feels great. I don’t know why I procrastinated so long on doing that. I feel unburdened.

I also ran some errands. Oh yeah, and made pulled pork enchiladas. Who knew enchilada sauce was so easy?

Today was an off day so I didn’t do much in the way of writing. I revised a story, wrote this blog post and several emails, but no new fiction words. I feel fine with that since I finished 2 stories this week, and finished a novel the week before last. I’m still riding that productivity high, and I know the pressure will return when I get edits for TALEs back.

The 1980s—and other terrors—are alive in Stranger Things.

I feel like I came super late to this party because Stranger Things was lighting up the Twitterverse while I was on a roadtrip to Iowa a couple weeks ago. But I’ve got to write about it anyway, now that I’ve had a chance to watch it, because it’s just such a fun show.

I heard that it was scary, but it’s not. It does have some horror elements—or fantasy elements, if you ask me, with the D&D influence. There’s a lot of overlap—but it never kept me up at night. Not that most scary movies can manage that any more.

Stranger Things is a paranormal suspense TV show produced by Netflix. The first episode opens with a few kids playing Dungeons & Dragons in a basement in the 1980s. The soundtrack features 80s synthpop and The Clash. The visual aspect is distinctly 80s, too—the big hair, the bad sweaters. Wall-mounted telephones with spiral cords.

Here’s a couple photos of the show, near the end, of my two favorite characters.

Dustin is just plain funny. He brings some humor and lightness to the show. Unlike most comic relief, which is just a side act, Dustin is also intrinsic to the plot of the story. He influences the relationships between the primary characters and helps solve some of the plot problems in the finale with his resourcefulness.

If we’re talking drama, though, Eleven here is the star of the show. She does so much with so few lines in the first half of Season 1, yet still manages to bring depth to the character. This would have been an easy character to flub, with the mystery built in and so little dialogue, but she nailed the delivery. 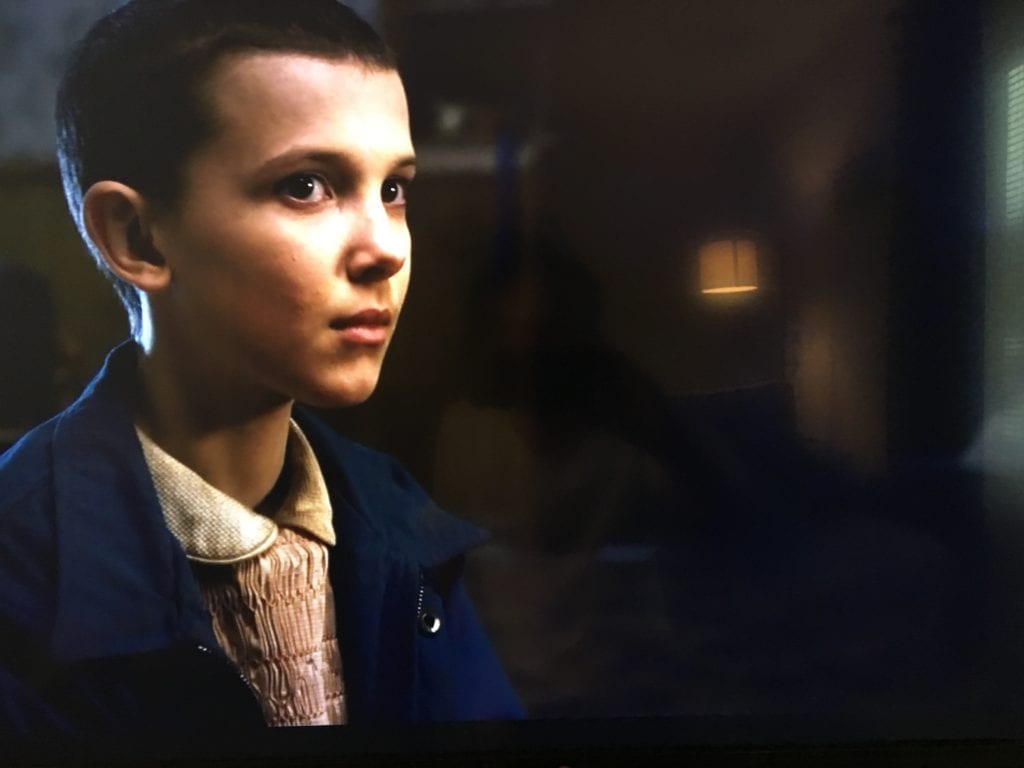 The ending set them up for season 2—of course. A tiny, tiny little cliffhanger that leaves things open. I won’t say more.

There are a few problems with the plot of the show, but nothing that can’t be overlooked if you’re looking for entertainment. Things only writers would notice. I also like that they’re starting to do 8 episode TV shows as opposed to the normal 12 or 13. Longer seasons always seem to have a lot of filler. Stranger things moved at a great pace.

Tomorrow, it’s back to the day job for me. I need some new words, however, so I’ll fit a few writing sprints in between day job stuff. One or two in the morning, one or two in the afternoon. If I can log a thousand new words on the WENDIGO short, I’ll be happy. Next set of videos for the Short Story Workshop comes out Wednesday, so I can at least be productive between now and then. If I hit 3k words by Wednesday and my math is right, that’ll be the end of the WENDIGO story. That would make 3 stories finished in a week’s time.