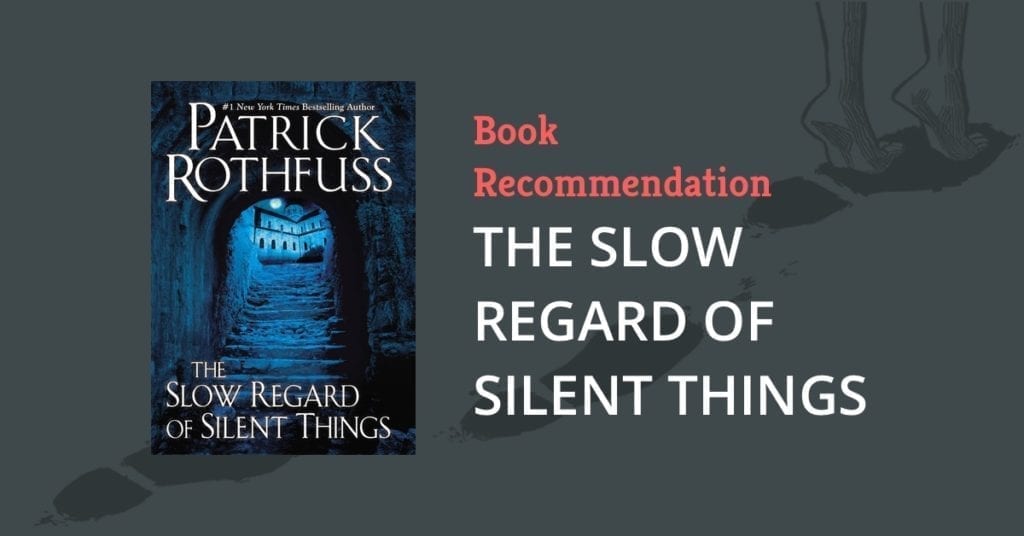 I’m not going to do book reviews any more. It was easy to be positive about the first one I did, but I recently read a “classic” scifi novel written by a BIG NAME AUTHOR and did not like it. I wrote a scathing review … but, after some reflection  I sent it to the trash bin. I have no desire to be a critic.

My goal is to celebrate good books. So I’ll be posting reading recommendations instead. This tiny distinction is crucial as it means that I can focus on sharing good books with you—books I fell in love with, books I return to over and over again, books that make my heart pound or my chest ache—instead of books I dislike.

(It’s a good motivation to read more great fiction, too. We all need a few more of those kinds of excuses, don’t you think?)

THE SLOW REGARD OF SILENT THINGS by Patrick Rothfuss

Speaking of beautiful books, the gem I’m sharing with you today is a fantasy novella called THE SLOW REGARD OF SILENT THINGS by Patrick Rothfuss. I bought a copy from the Tattered Cover in Denver, CO when I was traveling last month and read it on the plane ride home.

It’s a haunted, odd little story about one of the minor characters in Rothfuss’ KINGKILLER CHRONICLE series. The protagonist’s name in this book is Auri, and she lives in the “Underthing,” her name for the tunnels beneath the University.

Auri is a mysterious character in the THE WISE MAN’S FEAR and THE NAME OF THE WIND. She keeps to herself. So I was giddy when I realized that this book was all about her. I immediately wanted to know more.

Even if you’re a first-time Rothfuss reader, you’ll be able to enjoy this little marvel for a two reasons:

For one, the beautiful story is decorated with black and white illustrations that are crisp and stunning. Rothfuss’ prose builds a vast, sprawling world and takes us deep into Auri’s struggle to survive alone, and illustrator Nate Taylor elevates Auri and the Underthing to the plane of visual reality.

Secondly, Rothfuss’ prose in Auri’s voice has a haunted beauty that not even the most lyrical passages in THE WISE MAN’S FEAR attained for me. Here are some of my favorites passages from THE SLOW REGARD OF SILENT THINGS:

“The Twelve was one of the rare changing places of the Underthing. It was wise enough to know itself, and brave enough to be itself, and wild enough to change itself while somehow staying altogether true. It was nearly unique in this regard, and while it was not always safe or kind, Auri could not help but feel a fondness for it.”

About a buckle that Auri was considering gifting to her unnamed friend—only referred to as him or he in the narrative. (Readers of the other KINGKILLER books will know exactly to whom Ari is referring.)

“But no. It didn’t suit him. She should have known. He was not a one for fastening. For holding closed. Neither was he dark. Oh no. He was emberant. Incarnadine. He was bright with better bright beneath, like copper-gilded gold.”

Sometimes Auri is full of wisdom:

Another beautiful passage that shows the emotional depth of Rothfuss’ writing:

“All watery and loose inside she searched about, peering around corners and shining her lamp into shadows. Barely ten feet away, she found her burlap sack torn to tatters. Underneath the scent of her sweet cinnas soap was the smell of musk and piss. There was a tuft of fur where some small climbing beast had rubbed itself against a jutting brick.

Auri stood. All tangle-haired and sticky. Her tiny face was stunned at first, numb in the flickerling yellow. Then her mouth grew furious. Her eyes went hard. Some thing had eaten all her perfect soap.

Reaching out, she took the tuft of fur between her fingers. The gesture was so tight with rage she feared she’d snap and crack the world in two. Eight cakes. An entire winter’s worth of soap. Some thing had eaten all the perfect soap she’d made. It dared come here, into the proper place for soap, and eat it all.

She stamped her foot. She hoped the greedy thing shit for a span of days. She hoped it shit its awful self inside-out and backward, then fell into a crack and lost its name and died alone and hollow-empty in the angry dark.”

If you want to know how Auri’s story ends, buy the book on Amazon (that’s an affiliate link, which means I get some pocket change if you choose to buy the book based on my recommendation.)

Definitely grab the paperback if you do get it (it’s cheaper, if you can believe it, than the Kindle version). That way you can get the full effect of the illustrations, too. Then give it to a friend. Or your kid.

Or finish it in a coffee shop and leave it to brighten the day of a random stranger who is struggling, like Auri, in a broken world.