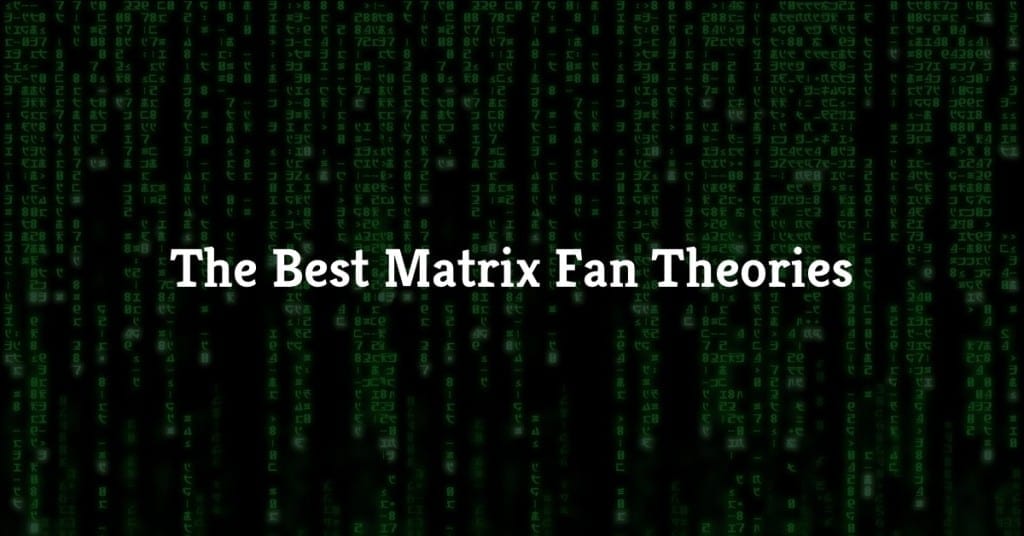 The Matrix was one of the first science fiction movies to really blow my mind. It had action, hackers, philosophical mind-bending (figuratively and literally), killer robots—everything a boy could want.

I still love all three films in the trilogy despite their flaws—and there are many. The famous scene in The Matrix Reloaded where Neo speaks to the Architect while multiple versions of him call “Bullshit!” from the TV screens set into the back wall is particularly cryptic. The Matrix is famous for giving us more questions than answers, to the angst of many critics.

The lack of answers isn’t all bad. On the one hand, the open-ended nature of the story has kept me returning to the films for years. Even better, since the trilogy was released, a number of fan theories have been put forward to help clarify the story. Last week, an article on io9 about a particular Matrix theory brought these incredible fan theories back onto my radar—and what a joy they are. They’re intricate and thorough and as nerdy as a refurbished Atari 2600. I love all of them.

Here, I’ve collected the best fan theories of The Matrix trilogy. Put your cyberpunk conspiracist hat on ‘cause you’re about to get jacked in and taken for a ride.

Agent Smith Is the One

This is the Matrix theory that io9 wrote about last week. However, the version by The Film Theorists is far and away the better video.

The theory is fairly simple—it looks at the prophecy used in the film to determine who the One really is.

You can read another version of this same theory on TheMatrix101.com.

The Matrix in a Matrix Theory

This is perhaps the most popular, though not the newest, fan theory.

It’s been rehashed and debunked and reasserted many times. In essence, the theory holds that Zion (the last real-world human city, located deep underground) is just another simulation of the Matrix. The characters never entered the real world at all. When Neo wakes up to be flushed out of his pod in the first movie, he’s simply entering another “level” of the Matrix.

Supposedly, this explains how Neo’s powers in the “real world”—how he can control the machines and sense them after he’s been blinded.

Movie Pilot did a good breakdown of the Matrix in a Matrix theory, though you can find variations of this theory in many places online.

This is the most compelling of all the theories I’ve discovered. It’s subtle but it doesn’t require a counter-intuitive reading of the film.

Unlike the previous two popular theories, the genetic mutation theory holds that Zion is real and Neo is the One, just like the films say.

Instead of arguing with the film’s presentation of the facts, this theory focuses on the subtleties of why Neo seems to be able to sense and control the machines in the real world.

“Near the end of the second film Neo and company are in their ship when the Sentinels group up outside of a particular range. One of them swirls around and hurls an object at the ship. Neo knows it’s a bomb. These Sentinels are a good distance away. The crew quickly exit the ship fleeing on foot over uneven terrain. It’s an impossible escape. Neo resolves, “we aren’t going to make it.” Trinity insists, “we have to try.” She scales an obstacle and turns to see Neo stationary. He says, “Something is different. I can feel them.” We understand what he means. He doesn’t feel them in a tactile way; he senses them. He turns extending his arm and the Sentinels gyrate wildly before dropping to the ground mere seconds before Neo collapses.”

After taking us backwards through particular scenes in all three films, Reddit user reddittechnica concludes that humans continued to mutate genetically through the natural process of evolution even as they were being harvested for energy by the machines. Neo is most recent version of this mutation and his unique abilities explain his sensitivity to the machine’s signals.

The full explanation is a bit long, but worth reading in depth. Hop over to Reddit to check it out for yourself.

Morpheus Is a Bad Guy

Another theory I enjoy argues that Morpheus, the captain of the Nebuchadnezzar who wakes Neo and teaches him to manipulate the Matrix, is actually not a good guy.

This fan, who goes by KGBkid, uses mythological symbols to make his argument:

“What incriminates Morpheus is the fact that his ship is named the Nebuchadnezzar.

History tells us that Nebuchadnezzar was the King of Babylon.

Nebuchadnezzar was responsible for conquering and destroying Zion and for enslaving and exiling its people from their homeland.

If Morpheus’ goal is to help free the slaves (the humans) from Babylon (the Matrix), why is he the captain of a ship named after the King of Babylon?

Read the theory on TheMatrix101.com: “Morpheus Might Be a Bad Guy.”

The Questions Theory of the Matrix

This take on the trilogy adopts a broader, more philosophical point of view. According to Phil Brown, arguing about whether Neo is the One is totally missing the point.

“I initially proposed this theory about a week after the release of Reloaded: that each film has a central question that forms its theme. In the first two films, this question is vocalized within the early portion of the movie. In the third, it is implied, but not actually vocalized. The remaining 2/3 of all three films are spent giving tentative answers to their respective questions, culminating in a final, supreme answer. I believe it is more or less correct, and shows the trilogy to be more straightforward and cohesive than it is often taken to be.”

The question posed in The Matrix is: What is Real?

Reloaded asks: What is control?

And what existential question does Revolutions put forward? The ultimate question, and one that perhaps justifies the Christian imagery used at the end of the film: What is love?

This doesn’t answer our justifiable questions about Neo’s strange abilities, or explain any of the cryptic nonsense the Architect says, but it’s a plausible thematic examination.

Read “The Questions Theory of the Matrix Trilogy” for yourself.

The Theory That Connects Star Wars to The Matrix

Finally, there’s this wild theory—probably no more than coincidence but I’m not taking any bets—that connects Star Wars: Attack of the Clones to The Matrix through the woman in the red dress and the character Mouse.

“Mouse, you may remember, was also the architect of the Red Dress Programme, designed to distract newbies with a beautiful woman in a bright red dress in an otherwise dreary cityscape to highlight how quickly people can be caught off-guard.”

If you like far-fetched conspiracies, you can read it on Shortlist.com.

I’ll let you determine whether or not these fan theories answer the many questions the trilogy left unresolved.

Either way, it’s fun going down the rabbit hole. Whatever your criticism of the film, you can’t deny that the open-ended nature of some aspects of this story has kept people interested and guessing long after it left theaters.

Did I miss any good fan theories? Which one is your favorite? Let me know in the comments.