Hello everyone, and welcome to the show!

Today, I have the pleasure of presenting the cover of my upcoming novel, The Auriga Project. Let me just pull the curtains aside… 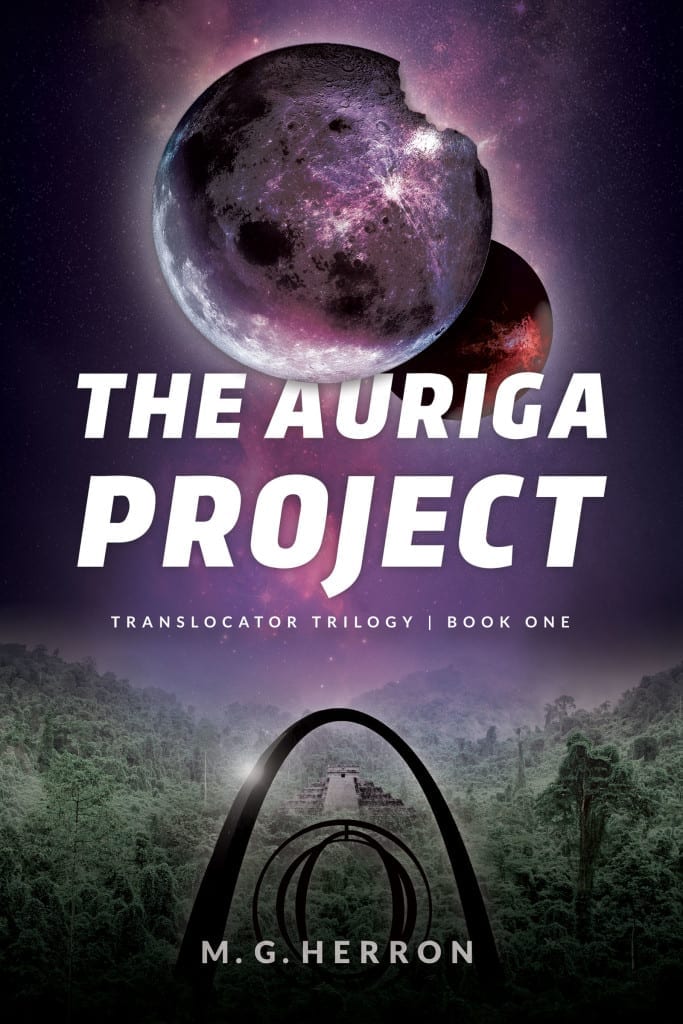 Ripped from Earth by a horrifying translocation accident, Eliana Fisk finds herself stranded on a strange planet whose denizens want her as a human sacrifice.

Meanwhile, her inventor husband, Amon, whose revolutionary but controversial machine is responsible for launching Eliana into the great unknown, desperately scours the stars to find his wife and rescue her from this terrifying alien threat.

Can Eliana survive on a hostile world long enough for Amon to find her? She’ll have to win over its ancient inhabitants—and their barbaric, controlling gods. But that won’t be easy on a planet that values blood and violence over technology and space travel.

M. G. Herron’s novel, The Auriga Project, is a gripping juxtaposition of cultures and creatures in the tradition of sci-fi classics. It’s also an intergalactic race against the clock that follows one Earthling’s desperate fight for survival and another’s tireless quest to bring her home alive.

The cover was designed by my friend, Jonathan. He’s the same talented artist who did the covers for the two short stories I published over the past year, “Stolen Choices” and “Lost Memories”. (If you read those, I should mention that this book is set in a different world.)

So where did this story come from?

The genesis of The Auriga Project started as the tiny seed of an idea. When it first occurred to me, I hit a brick wall rather suddenly. It barely qualified as an idea: just two lovers who were separated but tied together—somehow—across a great distance. All the same, I worked on it until the seed began to bloom into a story. Tied together by what? I asked myself. Why? Those questions took me many months to answer, and the answer is this book.

Why am I telling you this now?

Because The Auriga Project is slated for launch on September 15th, 2015.

Over the course of the coming weeks, I’ll share photos, post excerpts of the first two chapters on this blog, and give away a signed copy of the paperback to my readers (sign up here!). Plus, I’ve got a few fun scifi-related surprises…but we’ll get to those soon enough.

I can say that there will be books. Maybe a few celebratory beers.

And photos of puppies! Can’t forget the puppies.

If we haven’t met yet, my name is Matt, and I publish speculative fiction as M. G. Herron. Join my newsletter to get in on the upcoming giveaways! All my subscribers get a chance to get my stuff for free, before anyone else.

Hopefully, my book is something you’ll enjoy. If it is, stick around. I have a story to tell you…