I know I’m not the only one wondering why Fish Mooney (Jada Pinkett Smith) is consistently in the cover photo of Gotham next to James Gordon (Ben McKenzie) on Hulu, right? The Gordon/Mooney cover photo seems to be the one they consistently present, giving me the distinct impression that Mooney is the secondary character, or at least a top baddy. 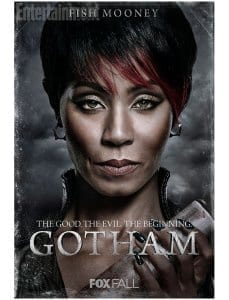 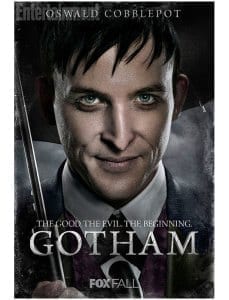 Not only is that misleading, because she’s none of those things in the show (she’s not even the most interesting enemy of Gordon’s!), but it totally under-represents the best villain in the show: Oswald Cobblepot (Robin Lord Taylor).

Gordon on is a good hero, a solid dependable type who trips over his own honor—often, and nobly. This classic characterization for the hero in a cop drama I can accept—not because it hasn’t been done before, but because it’s consistent with his character in his dynamic with Bruce Wayne, both in this series and in the many previous incarnations of Batman.The writers of Gotham have done a good job of layering Gordon with the filth of Gotham so that he’s not a pure white knight, but nuanced and gritty and influenced by the city he serves in.

With the ending of episode seven, “Penguin’s Umbrella,” Cobblepot reveals himself to be the most dangerous enemy of Gordon’s by far. He’s more dangerous than Mooney, scarier than the gangsters’ Falcone and Maroni, and its all echoed by the fact that anyone who is into this show already knows what he’s going to become.

Maybe Mooney will stop barking and finally bite, but for now Cobblepot is keeping me way more interested in what trouble comes next.