I finished the rough draft of my first novel recently, and I thought it would be educational to both myself and other writers if I shared the data I gathered during the process, and what I learned along the way.

The one thing that helped me get started—and helped me follow through with—writing this book was the realization that writing a book was a simple equation. Effort over time equals words.

That took the fear out of it. It made the prospect of writing the story—not just the story, but the novel—much less daunting. Not that I expected it to be easy (and it certainly hasn’t been), but it suddenly seemed achievable.

Keeping track of my word count

To make sure I kept the one-thousand-words-a-day promise to myself, I decided before I began that I would keep track.

Here’s how it works:

It takes me about 2-3 hours of focused effort to write 1,000 words (sometimes less, often more). At the end of each writing session, I write the date and word count in my notebook, with occasional notes (you can see some of the notes below). Some days, I put in multiple sessions of varying lengths. I might write 237 words in the morning and 744 in the afternoon. Not ideal, but they still add up the same.

At the end of the process, I had a bunch of data. Here’s a graph of my progress (click to enlarge):

I started August 22nd. I finished the draft on October 13th.

A couple of notes and stats about this graph.

The notes on the graph above indicate what I was doing on low-count days. Mostly, I was traveling between cities on a three-month road trip around the United States. There are also a couple days near the end where I was moving into a new house.

Those aren’t excuses, but facts. Turns out, I’m not as productive when I spend most of my day driving in a car or moving furniture. This was good to learn, because in the future I can adjust my plans and expectations accordingly.

As for word count, here’s a graph comparing my goals and results. 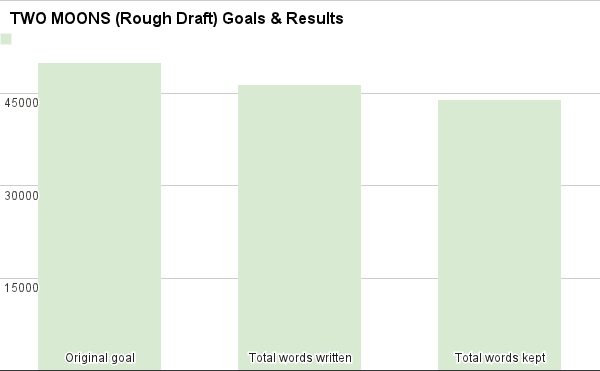 After I cut a few bad scenes, I was left with about 44,000. Also not a bad conversion, all things considered.

Up next: the revision process

I’m interested to see how long the revision process takes. How many days or weeks will each revision takes me? What will the word count difference be between drafts?

Typically, the final cut of my short stories are shorter than their rough draft counterparts, but I don’t know if that will be true with a novel. It’s a whole different ballgame and I don’t have enough experience to answer that from my own data.

In his memoir On Writing, Stephen King’s motto is 2nd draft = 1st draft – 10%. Other writers, like thriller author Joanna Penn, say that their revisions tend to be longer because they write so sparsely on their first draft.

I’m curious to see which process will apply to me. I’ve spent several days now on revision and already I’ve added words. I’m closer to 46k words currently, and still revising the first and second chapters. So who knows?

It’s nigh impossible to use word count to track your progress in the revision stages (and totally not worth the headache!). Instead, I’m tracking by “scenes revised” (thanks, Twitter!) to measure my progress in this phase.

I’ll post about those when I get to the end of this draft, right after I package and send the book off to to beta readers. (Which, by the way, if you want to be a beta reader, send me an email!)

How do you track your writing progress? Do you use word count? Any special tricks for tracking progress in the revision phase? Share your thoughts in the comments section!

P.S. Amazon buy links are part of the Amazon Associates referral program. Thanks for your support!