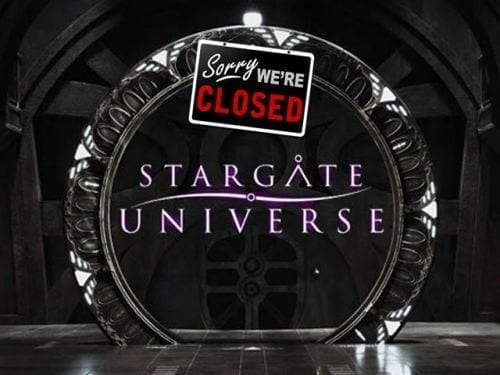 With only a single episode left to savor in the second and final season of the SyFy original series Stargate Universe, now is the perfect time to examine the factors that led to the show’s cancellation.

By now sci-fi fans expect it. They groan inwardly when SyFy cancels another awesome show, and yet they are not surprised. They saw Firefly beheaded; Dollhouse was murdered in its youth; Caprica went the same way; and the funeral procession for SGU has already been prepared.

The cancellations are expected. But are they understood?

Multiple theories have been posited to explain away the choice to cancel two of SyFy’s original series’, SGU and Caprica. Most agree (even Scalzi), however, that poor network scheduling is the main culprit, particularly the choice to move these shows from Fridays to Tuesdays. They were shucked aside in favor of the guaranteed revenue brought by WWE SmackDown on Friday Nights, which SyFy acquired rights to in 2010.

TV is a business, so it’s no surprise that the network values SmackDown over SGU. New shows still have to prove their worth, while SmackDown came with a Friday night audience. It’s simply bad business to put your best bet on the back burner.

But SyFy didn’t do that. They cut their losses, and SGU had to go. The fans are heartbroken, but the network will survive.

Could SGU have been saved? We can only speculate. Fans of the Stargate universe are quick to rise to SGU’s defense, and for good reason. It is a marked improvement over it’s predecessors. There are no cheesy alien costumes. The characters are likeable and they actually develop as the show progresses. For example, the scientist Nicholas Rush becomes less insubordinate and less secretive after he is left to die on a strange world.

The show also has a noticeable story arc, as opposed to the pre-boxed cracker-jack episodes that are common in other series’ like SG-1 and BSG. This may make it harder to gain a large audience, since someone joining the show mid-season could get lost without knowledge of the back story. But for someone who is a fan of the show from the beginning, the story is engaging and the progress the characters make in figuring out their situation is captivating (finally gaining access to the main system controls of Destiny; pressure from the homeworld that causes tension among different members of the half-civilian, half-military crew; mistakes they make along the way that cause the death of crew members and friends.)

If the audience for a good original sci-fi show is out there (and it is: SG-1, BSG, Lost, Heroes, Fringe all make further proof unnecessary), then why did SGU get the axe? What did SyFy do wrong?


THE SHIFT TO ONLINE VIEWING

What I’m going to call the online shift theory is touted around the sci-fi fan geekdom as the main reason for many a show’s cancellation, SGU and Caprica included. It goes like this:

“Sci-fi fans tend to be younger and technologically savvy, and so among the earliest adopters of new technology. We got DVRs first and stopped watching our favorite shows live. We were the first users of Hulu and iTunes, and sci-fi fans were torrenting new episodes illegally before most people even knew such a thing existed.”

And the reason, the theory continues, is that since the ratings systems doesn’t count online and not-live DVR views (when you skip commercials) properly, the ratings are poor for sci-fi shows and eventually the network drops the show.

Craig Engler, GM and senior vice president of Syfy Digital, wrote an article on Nielsen ratings and online viewing for Blastr, an “imagined by SyFy” blog. He writes, “There’s some truth to what’s being said, but there are also lots of misconceptions and things people overlook when the topic comes up.”

He goes on to explain how Nielsen ratings work, why DVRs that allow you to skip ads are a “bigger issue” than online viewing, how online viewing is counted, and how sampling works.

“Overall I don’t think there’s any evidence to support that Nielsens are wildly inaccurate or especially harsh on sci-fi shows. And sci-fi shows are actually canceled no more frequently than other genres. The reality of TV is that most shows fail, in any genre. That’s endemic to all entertainment businesses. Most movies aren’t successful, most books don’t become best-sellers, etc.”

In other words, the Nielsen ratings system isn’t great, but for now it’s good enough for the TV industry because they need some level ground to negotiate with advertisers on.
So the shift to online viewing doesn’t have that much of an impact. But if you factor in the tech savvy audience, the move to Tuesday nights, and the non-cracker-jackness of the writing, it is really no surprise that SGU was cancelled after all.


A TV INDUSTRY IN FLUX

Engler does provide a few caveats, or back doors through which to escape from the unpredictability of the TV industry. First, he writes that Nielsen plans to unveil a new ratings system that includes online viewing:

“Later this year Nielsen is going to roll out a new rating that combines TV and online views for shows that run online with the same ads as on air, and that may entice more advertisers to buy their online and on-air ads in sync. Until they do, there is a real business need to track them separately.”

In the case of Stargate Universe, for example, episodes can be streamed on Hulu. But as of now, the week before the final episode is to air, only the twelfth episode is available on Hulu. That leaves multiple episodes that the frequent viewer may wish to see that are unavailable on the only online service that brings SyFy revenue.

The missing episodes can be streamed on alternate streaming services, but they don’t do SyFy any good since they are not paying SyFy for their use.

It seems sensible for SyFy to create their own streaming portal, instead of going through a third party. If what the fans believe is true, then SyFy has a large, tech savvy audience just waiting for a decent online viewing alternative. If SyFy also manages to sell the deal to their advertisers, then they could capture the shift to online viewing before it overtakes on-air TV viewing.

The pattern is laid out, the audience is looking for it… and until SyFy takes advantage of the situation, sci-fi fans will continue to see good shows die young and full of potential.
The second and most important caveat Engler mentions is that online viewing is gaining worth as we speak.

“The TV and online industries are both in massive flux right now, and that will continue for a long while. Five years ago, online revenue for TV shows was counted in pennies, and now it’s counted in nickels. Hopefully it will get to quarters in the next few years, and then online viewing might really start making an impact on the ability of TV networks to renew shows.”

In other words, online viewing has increased in worth to advertisers 500% in the past five years. There is no reason to suggest that this will change.

Indeed, SyFy would be daft not to take advantage of the online viewing market while it’s still affordable.

Perhaps Stargate Universe could have been saved, if the industry were in a different, more tech savvy shape than it currently is. Things are changing, though, and if online viewing (including DVR’s, on-demand, etc.) becomes the norm, it’s a whole different ball game.